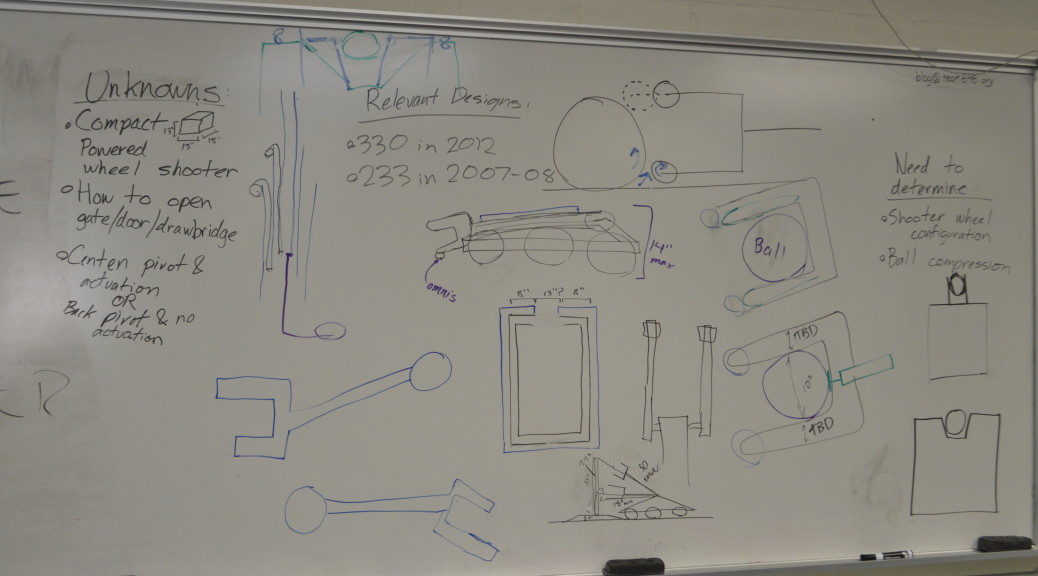 Meeting at Clark at 9:00 in the morning sharp, all sub-teams save Business met in the Cinema room to discuss robot design ideas throughout the entire team. The reason for this is to get everyone on the same page on what we will be striving for during this Build Season. Also, this enables members to voice their opinions on what could make a better robot.

Bhavin of Programming configured the Axis Network Camera so it could transmit a video stream from Centurion to GRIP for vision processing. Jake continued honing his skills in Java programming using some CodingBat exercises. He also worked with Jack, Robotics’ former President, on wiring the Axis camera and light-ring to the Power Distribution Panel on Centurion.

Sipan and CAD team finalized the layout for the build plate. They also designed and manufactured the mechanism that’ll pick up and shoot the object. The group also cleared a jam in the Maker Bot Replicator 2 and made great progress on the drive train.

Nanor of CNC Mill and Jonna of CAM finished the Castle’s watchtower. They extruded the High Goal by 6″ and added a bar that could support 130 lbs. The pair then helped Devon of Prototype with the Draw Bridge. After which Nanor moved on to help Karin, Lauren, and Lousaper to make the platforms.

James and Meetkumar finished the robot drive base with proper spacing between wheels. They even added a handle so someone can ride it to give it the proper weight needed. James then helped out Mr. Black with testing the intake and shooter wheel sizes.

Dustin of CNC Mill helped Devon and Jonna create the Draw Bridge Obstacle. All that’s needed now is to add the springs. Dustin also cut out pieces of wood with Jacob to create ramps with help of Eden.

Christopher of Animation team messed with 3DS to get a proper hand but couldn’t find any way to finish a good model.

Devon and Lauren of Prototype worked with Jonna of CAM and mentor Dr. Hunt on constructing the Draw Bridge.

Lunch for the day was chili dogs. Very yummy.

Roupen of Welding and Eden split up for the day. Eden went to help the mechanical team on Obstacle building while Roupen thought of a way to shoot the ball. He decided on a flywheel design and spent the rest of the day until 7:40 building it. He also got James of the CAM team to help him pocket pieces of plywood to house bearings.

Mika, our powerful President, worked on getting a “to-purchase” list made. Alexander and Mr. Black focused on the mechanical needs while Mika worked on the electronic and wiring items needed to purchase. She also helped Claire set up the electronics plate.

The conclusions reached by the end of the day are as follows: Wheels <2″ diameter do not effectively shoot the ball with 1 CIM powering direct drive. Unlikely to work much better with more motors. Insufficient rotational energy in the small wheels. 4″ dia and greater wheels shot the ball with acceptable range/force when direct driven by one CIM (insert Video). Having ball in contact with wheels, then energizing wheels, does not sufficiently accelerate the ball. Close shooting into high goal works very well by human hand, and seems like it could be mechanized. Impacting the ball seems highly variable so far, at least in tests by human hand. Side mounted wheels (rather than top and bottom) could be an option to use bigger wheels. Spring loaded plunger seems promising, if it can be made precisely using linear slide components. A prototype wooden box with rollers driven by two cordless drills also seemed capable, but did not not launch the ball nearly as far as the spring loaded plunger.