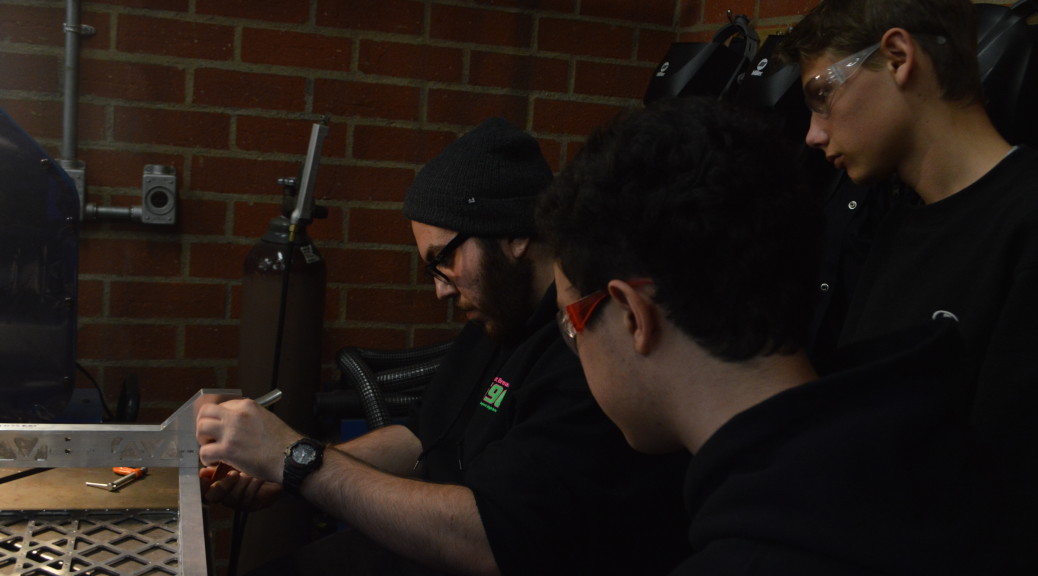 The day was overcast, with sheets of rain pummeling down from above. There was also a wind, cutting through any jacket in its way. But this weather won’t stop Team 696 from progressing onward with their plans. No weather can, for Robotics is what all the members live and breathe.

After a brief meeting, the team began to work around 1:15. Much had to completed, for a complete Robot Frame was expected to be completed soon for the practice robot. Welding member Roupen was assisted by Vice-President Alexander, President Mika, and mentor Mr. Hoard in this task.

Together, they were able to rivet the practice robot frame together. After the rivets were in place, the members also drilled through parts to later add screws.

Roupen took the frame to begin welding. He was helped in welding by his assistant Welder, Eden. The whole process went smoothly, leaving very nice looking welds and a sturdy Robot Frame.

In the Cinema room, Jacob of Simulation team and his mentor Dr. Stone began computing the calculations they’ve been calculating for the past few months. They made some improvements on frictions and motors, and how many amps the motors will use given as amount of torque, which they can derive from the friction present. They also conducted more research and MATLAB implementation.

Business team had multiple tasks for the day. Nicole vectored the logo for Glendale Education Foundation and worked on making a duplicate copy of the team’s pages at the end of the Design Book. Arvin and Anna finished and finally submitted the Google Grant.

Andrea, also of Business, worked on converting files to svg for the team’s dog tags. These files will allow her to make a template on Adobe Illustrator so she can add the names of members and sub-groups to the dog tags.

Nanor of CNC Mill team worked on gearbox plates on the Mini Mill with her mentor, Mr. Widholm. Jonna of CAM would write the program needed to manufacture the gearbox plates, and then Nanor would operate the Mill. On the first of ten plates, the part broke the 1/4″ endmill and flew off its clamp and into the HAAS window. What exactly happened isn’t clear, but it was probably not gripped tight enough in the vice.

Other CNC Mill member Dustin finished drilling the remaining holes on the front and back robot rails, which he then gave to Welding team. Then, with help from Mr. Widholm, Dustin set up the necessary tools to Mill out step on some vice jaws. They plan to use the setup to hold a large aluminum plate to create part of the Shooting Arm of the robot later.

CAD team has been finalizing the design for the telescoping arms and mounting bracket. Their bumper design had been finishes as well, but they might have to redesign it depending on later testing. Polycarbonate has also been ordered to create the control board, whose design has been finished.

Karin of Prototype team worked with Jake from Programming team on wiring. Together, they attached the wires which they had already stripped and crimped to the new batteries with nuts bolts. They also had to use a big heat shrink as well. Karin was later pulled aside by Sipan of CAD to finalize spacing of the control board buttons relative to her finger positions.

James of CAM spent the day creating shooter side plates and bumper support reinforcements on his computer.

Mika, our Shining President made a purchasing list for Mr. Black to look to when purchasing orders for the team. She also helped Alexander, Roupen, and Mr. Hoard in constructing the Robot Frame. Prior to welding, it weighed 9.1 lbs.

Alexander, our Sparkling Vice-President watched over the activities of the day, knowing that an order was placed to McMaster, West Coast Products, B&B Manufacturing, and Sailrite for parts. Thanks in part to him, the practice drive base was also assembled and began to be welded.

Among numerous other accomplishments, the batteries were reorganized on their shelf. One of the new charges also got SB50 connectors crimped on.

Mr. Black conducted all the orderings of the day. Parts were ordered from McMaster and West Coast Products. All KOP voucher products were also ordered. Greyhill encoders were ordered from Digikey for the transmissions, and the network switch was ordered from Amazon. Mr. Black also installed a hook near the welding station in the garage for C-clamps to hang off of. He also assisted Jake and Karin in installing battery cables and Jake with installing Anderson Powerpole SB50 connectors to the new DualPro RS3 battery charger.