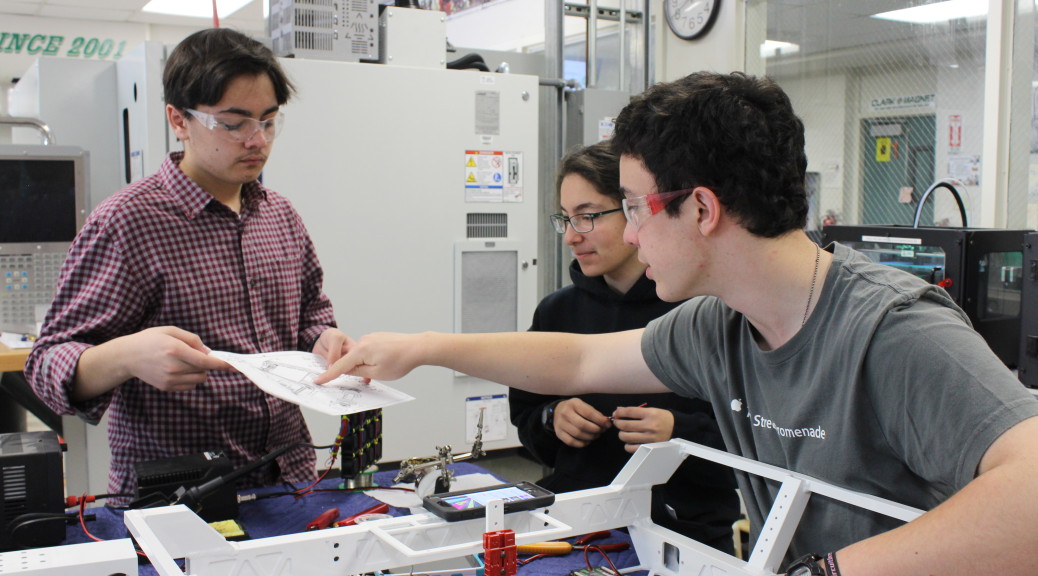 Team 696 started their day off at 10:00 AM, an hour later than usual. Before starting any actual work, the members gathered on the Lab Floor to take part in an information-based meeting where updates were given and tasks assigned.

CNC Mill team member Dustin finished Milling the 0.75″ boxtubes on the Mill, mostly consisting of drilling and tapping holes. Then he took Jonna’s CAM program to make holes on the 1″ boxtube for the extending arm, all six taking an hour in total. After this, Dustin was helped by CAD member Claire with Milling six elbow connectors that will be attached to the Telescoping Arm, with Claire setting up and offsetting the stock. She also cut pieces with the band-saw.

Animation team member Anthony C. finalized his explosion animation while Christopher deconstructed and grouped the Robot for the driving animation.

Jacob and mentor Dr. Stone of Simulation team spent the day refining their model of the shooter. After adding the piston’s force, the two were able to account for the ball being shot by the piston into the shooter wheels, then being pushed through those wheels, being propelled then by the wheels only, and finally the ball exiting the system.

Member munched down on pizza for lunch.

Lousaper of Lathe team finished the Pivot and Winch Gearbox Shafts as well as the ThunderHex Shafts for the Claw.

Business member Anna was able to finally finish the Business Plan Layout. She had been working at this for the past few meetings, so the completion of said Layout is a huge accomplishment on her part. Working in the same room was Samuel, the team’s handsome and single Photographer and Blogger. He was writing up the prior day’s blog before heading off to take beautiful pictures.

Luke of Web continued working on the Chairman’s Video Script. He also sorted through some b-roll footage to try and source the best ones to use.

Mika, our Decadent President, worked alongside many different sub-groups. She helped Programming team get the Robot to drive, then she assisted Photography mentor Mariam in taking pictures of parts. Mika also continued wiring the Robot with help from Vice-President Alexander, then creating her own blueprint using Vault for the first time ever. Besides all this, Mika also took newly machined parts and sanded and buffed them. We thank you for your ever-hardworking ethics Mika.

Mr. Black submitted two DonorsChoose projects. One was for PLA filament and the other was for SSDs for new programming laptops. He also machined an additional arm pivot, 6 arm pivot-tube spacers, and compacted aluminum chips for recycling. Mr. Black then ajusted the belt tension on the Tormach SlantPro Lathe, used Inventor HSM to program a winch spool Lathe operation, and configured the Haas Lathe post processor. He also ran the first automated part cycle operation on the Haas ST-10 Lathe, a big accomplishment.

The lab finally closed at 2:05 in the morning.