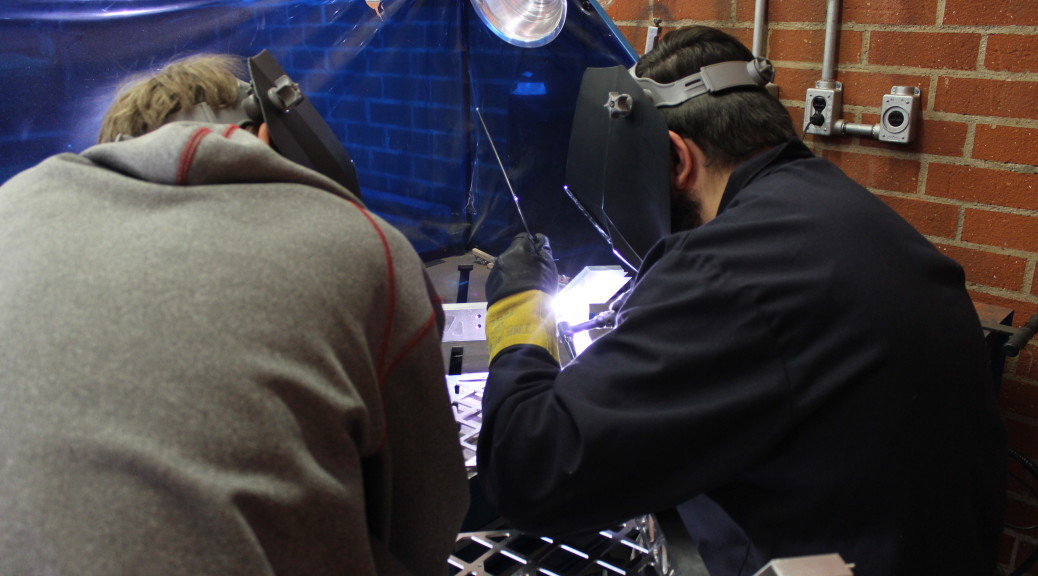 The day started later than usual, beginning at 10:00 instead of 9:00, members assembled in the lab for their meeting.

Business member Andrea received the Platinum-Wrench Award. Still just a rookie member, Andrea had been given many jobs to finish in a short amount of time. Everyone was glad to have Andrea on their team.

After getting the award, Andrea went into the Business room to finish working on the dog tags using Adobe Illustrator. She also worked on the cover for the Alumni Book.  Other Business member Nicole made the team’s standard (flag). Nicole also contacted Team 696 alumni to update the Alumni Book.

CAM team member James had to leave early for he became sick. Before leaving he worked on creating a 9″ arm support box-tube and two of four pieces on CAM. Jonna, the other CAM member, worked on supports for the arm as well, and a spring holder for the hook pistons that will allow the robot to hold itself up from the Castle.

Lunch for the day was more pizza, which was absolutely amazing. It is unknown how pizza can taste so delicious such as this one did.

CNC Mill member Dustin Milled out three Standoffs on the Super Mini Mill 2. He also used the Mini Mill to manufacture 9″ support plates. The Mini Mill 2 actually broke down for a while, before members found the program problem. Nanor cut stock for small pieces that will later be used in the arm-extension mechanism of the Robot.

Jacob of Simulation and Dr. Stone, his mentor, continued organizing parameters from the shooting problem which was how the RPM would decrease during shooting out he ball. The wanted RPM is 5,000 and the gearing was 12:45, but now they’ve tried 45:12 instead with a starting RPM of 18,700. Reason being is the motor’s capacity is already 18,700 and it will cause the final to be 1,300 RPM. This cleared up programming issues as well.

Mika, our Solid President worked with Karin with wiring the Power Distribution Panel, getting power to all electrical components, and routing the PWM wires to the roboRIO. She also did a lot of stock cutting and the usual task of watching over everybody.

Mr. Black was able to paint an old metal cart, hex broach and tumble the wheel hubs, flush tumbler with clean water, and organize endmills in the inventory room. He also installed a coolant circulating pump in the Haas Super Mini Mill 2 and cleaned the pump in Haas Mini Mill. Mr. Black even began wiring LED flood light that will be installed to Haas Mini Mill and then fabricated hold-down feet for the new arbor press stand.

Alexander, our Fatherly Vice-President, finalized the pivot structure for the Robot Arm. It was decided that the superstructure frame will have an aluminum tube as a sleeve welded to it, and then a 1.5″ OD tube will go inside of that and be used as the pivot joint.

And inside of this dead axle tube will be a live ThunderHex shaft that will power the winch spools on both sides of the robot. 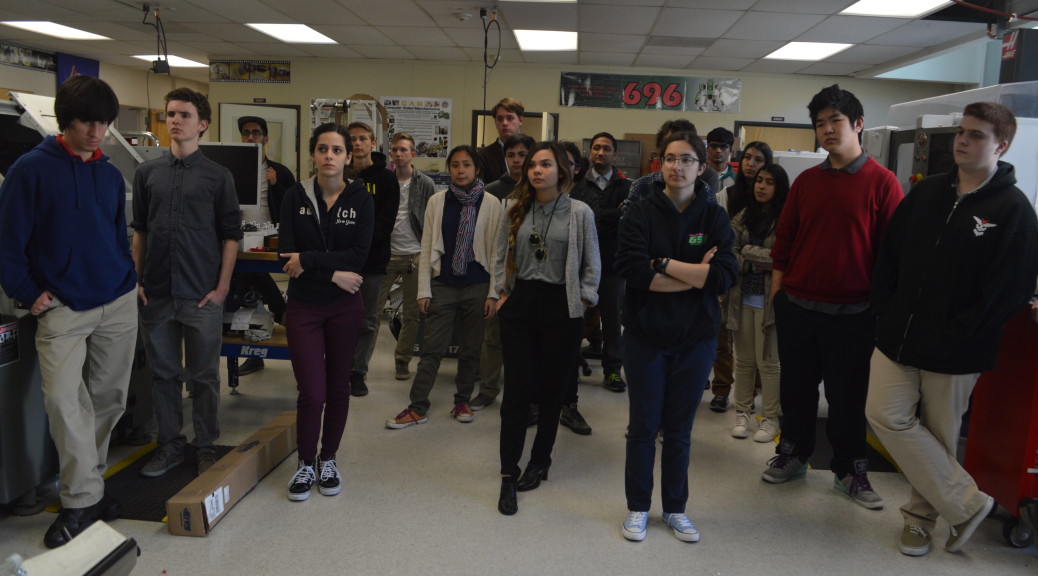 School at Clark Magnet ends at 3:00, but by 3:10, those in Robotics meet in the lab to begin working. They all first attend a meeting that tells them what they should focus on for the day.

Member Luke of Web team worked alongside Clark student Maggy. Together, the pair worked on the script for the Chairman’s Video. Hopefully, this will be completed soon so the actual editing can begin.

Business team member Andrea worked on Excel, adding new sponsors to the sponsor list. She also worked on the dog tags with Adobe Illustrator, and is glad to report some of the dog tag designs are completed. Nicole remade the PDF of Behind the Design page featuring Team 696 for Mr. Black, then she continued working on the Team’s Brand Guide.

James of CAM finished the standoff program. At around 9:00 PM the standoff was beginning to be manufactured. James then began working on another standoff, but this one looks a little different.

Karin of Prototype worked with Mika for the whole day. Together they began wiring the Practice Robot. To do so, Karin had to learn all about the wiring process, then they had to actually physically wire it up.

Right before dinner, the Team had a Noodle War where they used Pool Noodles as their weapons. It was fierce and very fun.

Eden and Roupen of Welding finished the bumper brackets. They continued to weld the base plate onto the frame, finishing that as well. Good job Welding team.

Simulation member Jacob and Dr. Stone – his mentor – were concerned that the torque of the motors would end up stalling out, so they looked through their calculations. They found that when the ball is being shot out it doesn’t stall the motor at all. During the 1/240th of a second that the ball is in contact with the wheels, Jacob and Dr. Stone calculated it would reduce the RPM by about 200. After talking with Alexander, they now have to find calculations about a back axle in the shooter that would add some mass and act as a flywheel. A flywheel, not to be confused with a shooter wheel, is a wheel that’s specifically made to add inertia to a system. This would make the reduce in RPM less, increasing the torque of the shooter itself and decrease strain on the battery.

Mr. Black assembled the Kreg stand for Arbor press. He also fabricated a wooden top and organized the machinist toolbox.

Alexander, our Fantastical Vice-President, finalized the Pivot Gearbox. It will utilize two 775pro motors at almost 280:1 reduction to rotate the entire Robot Arm.

Continued wiring of the robot continued while Alexander finished the Competition Robot design. He also found a way to mount the sprocket for the arm joint to the box-tube and how to get the arm to pivot on a strong joint that won’t break. 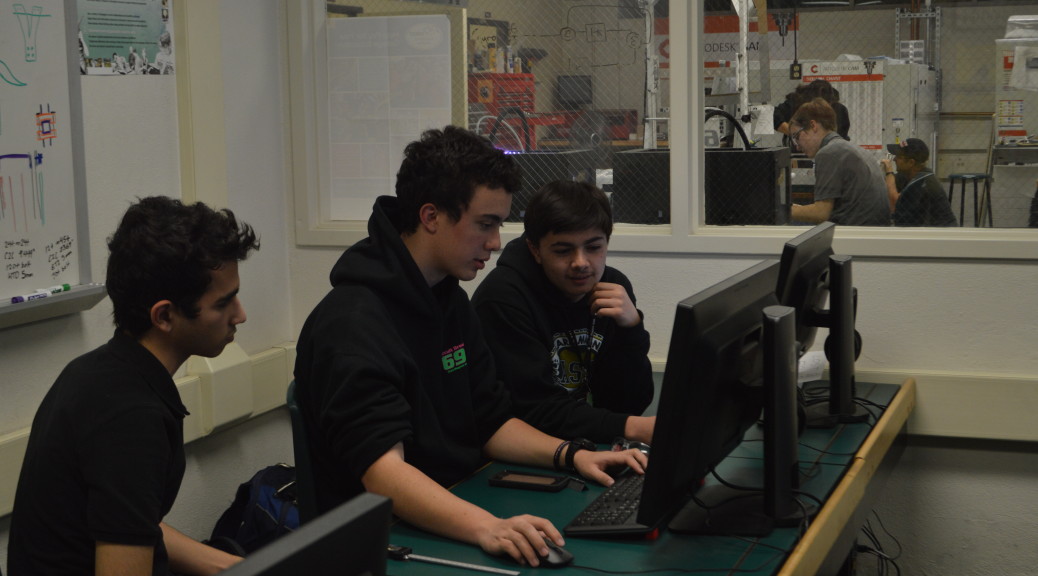 As always, the workday began with a meeting where the tasks and goals were given out for the day.

One major accomplishment of the day was the completion of welding the Robot Frames, done by Roupen and Eden. The welding was finished to the point for wiring to begin around 7:00 PM, and around that time Roupen began to weld the competition Robot Frame.

Lathe member Lousaper sanded down the ThunderHex shafts. Using the manual Lathe, she did so to allow them to fit into their bearings.

Programming member John worked on getting Snapdragon to move autonomously while Bhavin continued working to get visual processing to work through the network. Jake focused on figuring out which batteries are best to use.

Over in the Business room, the lone member Andrea continued research on button prices. She also expanded her search to pens. Then, she discussed possible Chairman’s Video ideas with Media member Samuel.

CNC Mill Nanor made the Bumper Supports. Other member Dustin was assisted by CAM member James in completing both SB50 connectors. James also programmed the CAM for bumper supports to begin to be manufactured.

Jacob of Simulation team and his mentor Dr. Stone have decided to stop focusing on completing the overall calculations, but rather to focus on the specific compression of the ball and how it will affect the battery. During their new calculations, they found that the motor’s torque is significantly higher than the stall torque.

Karin of Prototype spent the day helping out Mika and Mr. Hoard. First she learned how to cut 1″ x 1″ box tubes at unusual angles. Then the trio began to assemble the competition robot with rivets.

They also set up the special table, covering it with a blue blanket and placing assembly and wiring items atop it. Karin drilled and tapped holes on the Practice Bot because it had to be drilled before any assembly could take place.

Mr. Black searched through the sumps on the Haas Mills for fine chips. He also bolted the Burr King sander to the floor for earthquake safety. Mr. Black also printed and prepped sponsor Thank You letters now ready for mailing. After this, he then entered about 26 lines of items – over $4,000 – to the expenditure accounting sheet for reimbursement purposes.

While it wasn’t a meeting day, Team 696 continued to complete and accomplish its goals. Business team members Arvin and Anna worked with Mr. Black on completing and submitting the Chairman’s Essay. 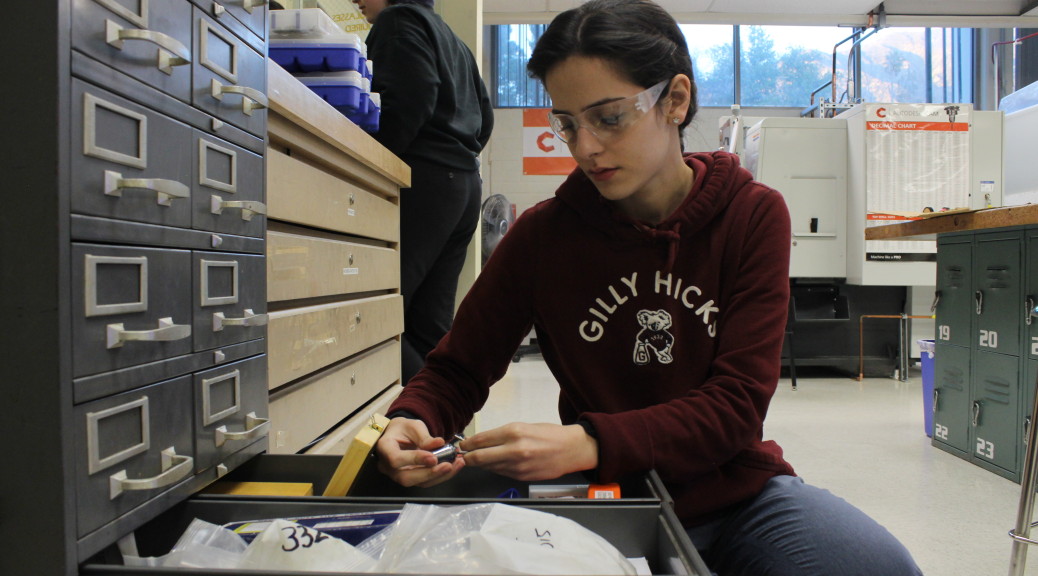 Once again, it was Robotics time. Right after school, around 3:00, members of Team 696 filled the lab to listen to Mr. Black, Mr. Hoard, and the two leaders Mika and Alexander discuss this day’s objectives.

Simulation member Jacob kept busy throughout the day. He started first by finding out about rolling friction. At first, Simulation team tried to get data on how the RPM was reduced when the ball was shot, but the shooting prototype wasn’t functional. They then took the shooting prototype and got a video of Jacob pushing a ball through with a spring. Simulation team used the video to figure out the compression and the change in rotation for the wheels.

Andrea of Business team continued her work on the team’s dog tags through Adobe. She also began vectoring names and creating a template for each individual dog tag. Arvin and Anna tried finishing up the Chairman’s Essay.

Welding members Roupen and Eden worked on the Robot Frame. Roupen nearly finished welding everything needed, all left to do is to weld the battery holder and the last three bumper support mounts.

CNC Mill member Dustin set up and cut out four shooter arm plates, each taking approximately 15 minutes. Being hard to secure, the fourth plate rattled out of the vice and broke a chamfer Mill. After cutting out a piece of metal, he ran the program to make a fifth one. Nanor continued working on gearbox plates.

CNC Lathe member Lousaper finished making battery plate standoffs which she began the prior meeting day. She used the Lathe to create them.

James of CAM helped finish two of the shooter “claw” plates before he headed home. James also helped with an electrical connector. He and Anthony K. of CAD might have found a solution to mounting the constant force springs to the elevator mechanism, but haven’t properly checked their work yet.

Mika, our Tactful President created a need-to-be-machined parts schedule for members, cut up materials, and helped put together parts for Roupen to weld. Of course, she also looked over all sub-teams, assessing their work and helping out when prompted. Mika looked over the Chairman’s Essay, and wrote her own version of it to show as a counter as to ascertain which version would be best to submit.

Mr. Black reviewed the Chairman’s and WFFA Essays. He also oiled the manual Lathe, moved the Hexawall out of the lab, and organized the endmills and taps drawer. Thanks to this hard work, the lab continues to be a safe and clean environment.