Early Wednesday day Team 696 was stationed outside of Clark with their bags. As they would be staying in Ventura over nights for the competition, the team brought along bags full of clothing and their personal belongings. After being loaded onto the bus, their journey began.

The first stop would be at the Haas Automation factory. It was here that Team 696 was led on a wonderful tour of the place, being informed of the history and inner-workings along the way.

Afterwards the team headed to Lazy Dog Cafe for some food as they were hungry from the long drive. Dressed in their team’s shirts, the pink train of students filed into the restaurant and filled a row of tables. Even with this many people Team 696 were respectful and remained quiet for the benefit of other customers.

As the actual competition didn’t start until the next day, Team 696 were able to have some fun. After getting checked into their hotel and rooms, they split off into two groups. The smaller group was tasked with pit-setup, and would join the larger group soon. The larger group headed to the beach, a few minutes away via walking. Dressed for the beach, Team 696 members happily made the journey to the beach for some volleyball and relaxation.

Being careful so as to not injure oneself before competition, four separate volleyball teams were created for the two courts at the beach. It remained friendly and not too serious throughout the day, and everyone had a blast. Mr. Hoard was even able to show off his amazing volleyball skills to the team, who stood in awe as they were utterly beaten to smithereens on the courts.

All too soon was it time to return to the hotel and eat dinner. For this night it was In-n-Out, right next to the hotel. Members ordered food and brought it back to their rooms to eat before bed.

Members were ready for bed before 10, and Mr. Black made the rounds to make sure everyone was comfortable in their rooms. Exhausted from getting beaten on the volleyball fields by Mr. Hoard, Team 696 fell into a deep slumber the first night at Ventura – ready for competition the next day. 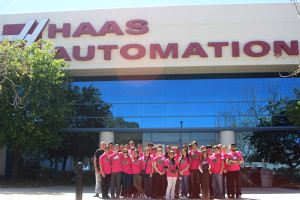