Deprecated: __autoload() is deprecated, use spl_autoload_register() instead in /home/buwqldmf/public_html/2016blog/wp-includes/compat.php on line 502
 Presentation | 2016 Team 696 Build Blog 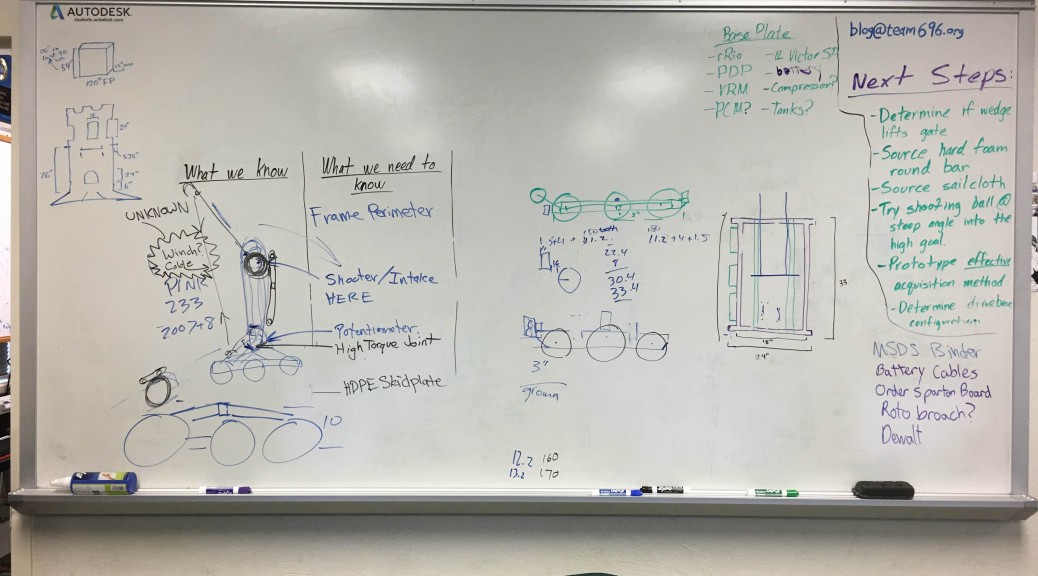 Clark members Anna and Daniel went with Mr. Black to Roosevelt Middle School at 9:45. While there, they showed off Snapdragon in action to the students. Afterwards, Mr. Dall gave a wondrous presentation on why Clark Magnet High School is a good school to go to. The Clark students returned to school at 12.

Some members also traveled down to Lincoln Elementary School. Jonna, Lauren, Luke, and Samuel went with Maggy – a Clark student – to assist the Lincoln Lego Robotics in their tasks. Heading down a little after 2:20, the members returned at 4:00.

There was also a meeting this day, running from 3:00 to a little after 6:00. For a great majority of it, Mr. Black, Mr. Hoard, and Mika met with the Business team members Arvin, Anna, Nicole, and Andrea as well as with Photographer, Blogger, and member of Media, Samuel. The reason for this meeting was to discuss community outreach, award submissions, and the upcoming Expo Day schedule.

Welding members Eden and Roupen started working on the Rough Terrain obstacle. But they split to do separate tasks after discovering there wasn’t sufficient lumber to finish it.

Eden then began to create the Ramparts obstacle while Roupen helped make the robot frame and tried out different wheel configurations.

Prototype members Devon and Lauren worked with Meetkumar and Jake of Programming and with Jonna of CAM on the prototype robot. Together they measured the base for a 6 wheel drive train, all within an hour. They then tested the wheel placement and found the first and last wheel space must be closer to the ends of the robot. They also found that it is quite impossible to slowly drive over the obstacles, the robot needs to be moving fast. The faster the robot goes over the obstacles the easier ti is. The triangles they’ve attached to the front of the robot increasing air-time experiences as it slides over the obstacles.

Christopher of Animation finished the character modeling tutorials and designed a box and edge for a character to be modeled in. He began looking for a model to fill out the cage and for a hand and head tutorial to finish making the character. Anthony C. spent the day colouring the CADed field for the animation and removed hidden or irreverent parts from the model. He did this so it won’t slow down the rendering time for each scene.

Jonna of CAM also worked with Dustin and Nanor of CNC Mill. The trio built the Low Goal using the Router. They also started putting the Castle Tower together so it could stand on its own. Near the end, they split off to help Devon and Lauren of Prototype.

After the Low Goal was cut out from the Router, Karin of Prototype and Lousaper of Lathe assembled it. Roupen brought out Alexander and Mikia and Anthony to see it, and they realized how difficult it would be to fit a high-goal shooter into a robot that can fit under it. They then found some neon pink and green fabric in the storage closet. The pair used the fabrics to make a flap on the Low Bar, Lousaper took it home to sew it.

Alexander, our gratuitous Vice-President, helped research a method of power transfer for the robot. As of now, the plan is to use 36 tooth 5mm pitch HTD belts.

It was around 6:15 that mentor Mariam accompanied Alexander, Mika, and Anthony K. along with Robotics Alumni Armand T. left Clark with Mr. Black to go to the Roosevelt Parents’ presentation that our principal Mr. Dall led.

The presentation went off without a hitch, and was a spectacular success. It ended after 7:30. 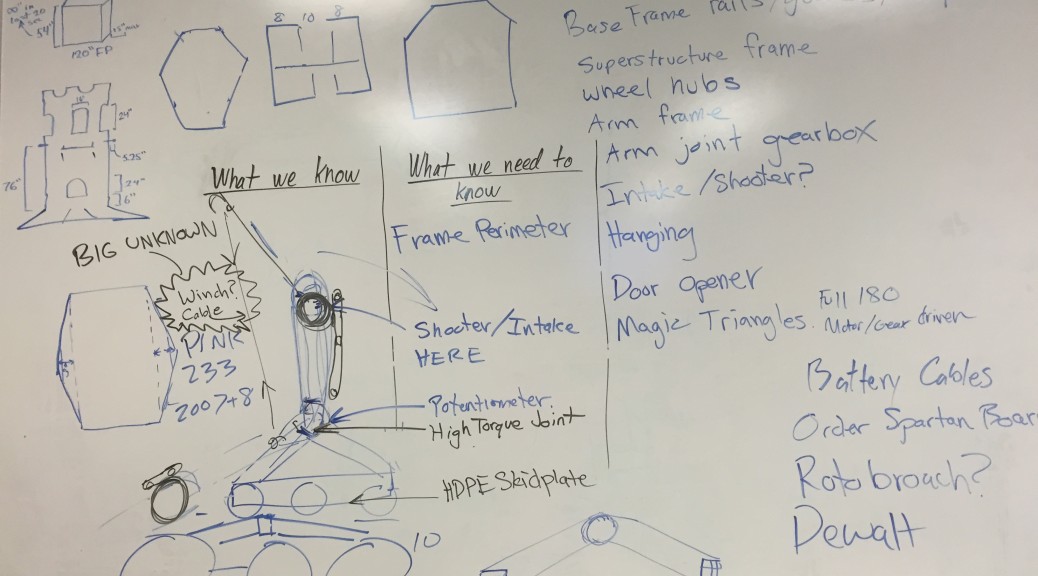 This day contained two events. One was a presentation down at Toll, and the other was an optional Robotics meeting.

Mika, Alexander, Jonna, and Anthony K. traveled to Toll Middle School at 9:45. Upon arriving, they helped get Snapdragon into the auditorium where Mr. Dall was going to present to the Wilson students.

After Robotics members drove around Snapdragon for a little to inspire the students Mr. Dall began the presentation on why they should consider going to Clark Magnet High School. The Robotic members would return back to Clark at 12:00.

During the optional meeting, members planned the potential mechanisms for the shooter, hanger, and arm. They used a cane as an outline of what the mechanism would need to do and possibly look like.

Alexander, our assiduous Vice-President, worked with Mr. Widholm and Mr. Black on constructing a team calendar. He also worked on creating a “Robot Timeline” spreadsheet. This would be used to collect all of our official meeting dates and give us as a team insight for planning a time-frame in which parts would need to be designed and fabricated.

Mika, our prodigious President, focused on Trello and putting all the necessary tasks that must be accomplished in the upcoming days. She organized them so she had a clear vision of what goals must be achieved and when.

Anthony K. of CAD worked on the base design of the robot. He used QHR as a point of reference.

Devon of Prototype team and James of CAM tested possible wheel configurations for the base of the robot. They did this to not only make sure the configuration of the wheels would work, but to find out if the actual wheels were made of the correct material that’d best suit the tasks at hand.

Mr. Black also informed the team of our brand new sponsor, AutoMeter. As a team, we hope this is the beginning of a very long partnership between them and us.

Team 696 Robotics’ Stronghold closed for the day around 8:30. 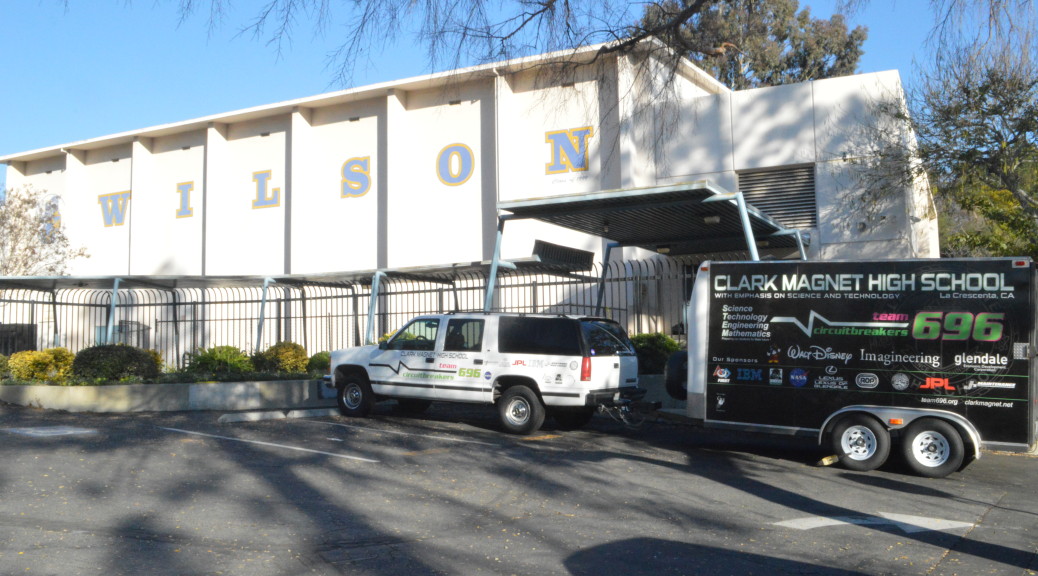 After some Wilson students talked with the Robotics members about getting in to Clark, they left the amphitheater in awe and shock, feeling that Clark was the right choice for them. But this wasn’t where the Robotics members left, no, they stayed for the parent presentation at 6:30.

They used the precious time between presentations to plan out the coming week and to discuss what was needed to succeed as a team.

This assembly lasted until 7:30, at which point the Robotics members packed up to leave.

Select Robotics members Lauren,  Anna, and Daniel accompanied Mr. Black down to Rosemont Middle School this day. Leaving Clark at around 9:45, they were to help Mr. Dall present to 8th graders in the school gym about why they should consider Clark as their High School.

Throughout this performance, the Robotics members drove Snapdragon around to show a little of what Robotics does at Clark.

Lauren, Anna, and Daniel returned back to Clark at 12.