The day had finally arrived – Presentation Day! That time of Robotics season finally arrived, where every sub-team gets to present what it is they do for the club, with every member (present) participating. And it started right after the team photo.

All teams spoke in front of their fellow members and mentors, being graded and questioned after each presentation. The whole process took approximately four hours from 3:00 to 7:00, with a brief break in the middle.

The audience were very polite of course, maintaining silence during the presentations and applauding at the end of each one.

And now, the moment you’ve been waiting for…the pictures of our wonderful teams conducting their presentations. 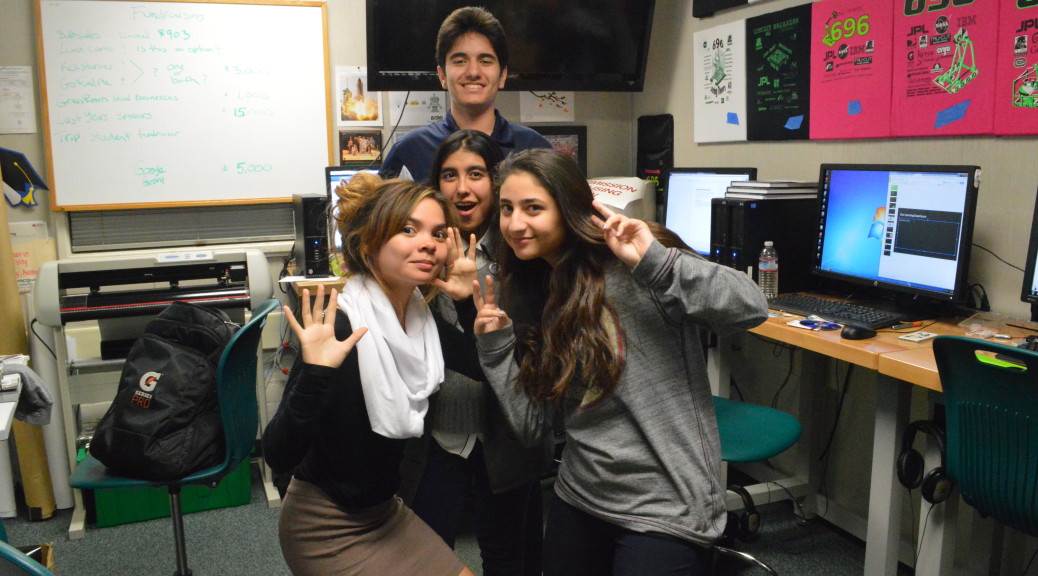 The day started out with a meeting, where our magnificent Vice-President Alexander gave a presentation detailing what is expected by our sub-team presentations. As the members of Team 696 listened, it could be seen that they were readying themselves for the following Friday, where they’d have to present their roles to the mentors.

Next was the famed Golden Wrench Award. This time, it went to Karin, dedicated member of the Prototype team. The bouts of applause all but drowned out her thanking everyone.

With the talk fully over, the sub-teams broke up to begin their individual tasks.

The Programming team continued their individual coding work. John was fixing his code while combining it with Jake’s. Jake himself worked on resolving erroneous robot code and continued coding in the battery.

Lauren, Karin, and Devon of Prototype team continued their work on the flywheel. Lauren also worked on their presentation.

Over on CAM, Jonna and James worked on their presentation. During this, James also finished the revised plates.

Jacob and Yerine of Simulation worked on their presentation. Yerine also conducted troubleshooting for their football trajectory program, as it was not working as predicted.

Animation duo Chris and Anthony C. finished up their storyboard. They then worked on their team’s presentation and researching what to do their safety animation video on and what type of style they’d go with.

CAD, having much to do, started right away and hardly paused for a break. The entire team started their presentation, while the individual members did other tasks as well. Sipan made some changes to his completed Fall Robot update and Mikia continued working on the electronics panel.

Anthony K. finished up his gearbox and Claire redid her intake plate.

Eden and Roupen of Welding helped out the Prototype team with their work.

They also worked on their own presentation. Eden continued his practice welding as well.

Lousaper learned from Mr. Black how to equip and run the brand new HAAS CNC lathe machine. She did wonderful, and with some more practice, will be fully able to work the HAAS lathe – crucial to the team.

Mill team members Dustin and Nanor worked on their presentation.

Then they shared it with the others, once out of the way, Anna helped out Andrea with her skills using the vinyl machine. Arvin and Anna also finished mounting the canvassed T-shirts to the wall.

The Photography and Blogging Corporation CEO and founder Samuel started considering his presentation. He mainly took photos for the other teams and helped around.

Now then, our leaders.

It is with a heavy heart that I report we have lost our President…Mika. She was absent as she was not feeling well. However, even without our fearless leader, we kept sane.

This was mainly due to our golden-hearted Vice-President, Alexander. Great as he is, the Honorable One not only presented a presentation about our presentations, he also finished his elevator, worked with the CAD team, helped out Prototype and Programming teams, he also took on Mika’s jobs.

Now we know, should we lose our adored President, we are in able-hands. Hopefully, we will never have to hear the words “the President is dead, long live the President.”

Mr. Black spent some time assisting Lousaper in how to properly set up the HAAS CNC lathe and on what their tools did.

The lab closed around 8:45, cold and lonely. Just like the world without Team 696.

It’s that time of season once more, when it gets deathly cold and the sun goes down beyond the horizon much earlier than usual. Despite this, the ever-working members of robotics assembled at the lab on time and ready to work.

Nicole, member of the Business team, was awarded the famed Gold Wrench for her hard work. The room was full of applause for her, as she definitely deserved this gracious award.

Prototype team, consisting of Lauren, Karin and Meetkumar this day, continued their work on the flywheel. With the design all but over, the team has continued the physical aspect of the project. This includes cutting the parts out and then assembling them.

Welding member Roupen helped out the Prototype team with their labors on the flywheel construction.

Rookie member Eden spent the time practicing welding, so he can quickly master the fine art and no longer need Roupen’s guidance at all times.

Daniel of Programming continued the logger coding. Other members John, Bhavin, and Jake conducted their own coding, but on different things. John was working on the autonomous code for the robot, and Bhavin resumed coding SnapDragon. Jake attempted to fix the battery program so the robot would be able to perform its tasks.

Lathe member Lousaper was working under the teaching of Mr. Black. Together, she learned how to set up new tools inside of the Lathe.

Dustin and Nanor worked under Mr. Widholm’s guidance to set up their own tools inside of the Mill.

CAD members worked together to start their presentation. Individually, Anthony K. worked on his toolbox and Claire made an intake mechanism.

Mikia practicing pocketing on an electronics plate using Autodesk Inventor. Sipan finalized the Fall 2015 robot update, we were all so proud of him.

Jonna of CAM worked on the presentation while James helped out Prototype team.

Over on Animation, Anthony C. and Chris brainstormed safety animation ideas. Once they figure out a proper scheme, they will set out to animate it into life.

Business team had a very busy work day, Nicole wrote content for the 696 Brand Guide, and also created the cover for the guide. She was also able to vectorize the sponsor logos.  Arvin conducted research on the entrepreneurship essay and Anna hung up the canvassed shirts (with help from the other members).

Andrea continued the spreadsheet work and categorization for the light bulbs that members were selling like hot-cakes.

And of course, last but completely not least, our divine Leadership team. Our ever celestial President Mika was, as always, working at top notch for the team. Mika helped out CAD and Prototype team on their individual team activities. She then created a presentation to inform the team of what Presentation Day asks of them. Mika then created a team calendar for the upcoming build season.

The team’s very own exalted Vice-President also had a full day. Alexander helped out the CAD team with their various work, then he went over to Programming and assisted Jake with his troubles. Then Alexander continued his elevator design with magnificent speed and efficiency. The team is so lucky to have a member such as him.

With the sun long gone, the lab was vacated and closed around 7:00, and the individual members went home to work on their homework like the good students they are.

As there was no school on Friday, the Robotics team did not meet that day. This will not always be the case, especially during Building Season. But, as it is not that time of year as of now, Mr. Black was nice enough to allow the team a day off from working.

We will return to normal the following week, fully rested and ready to continue our work as members of the 696 Robotics team.