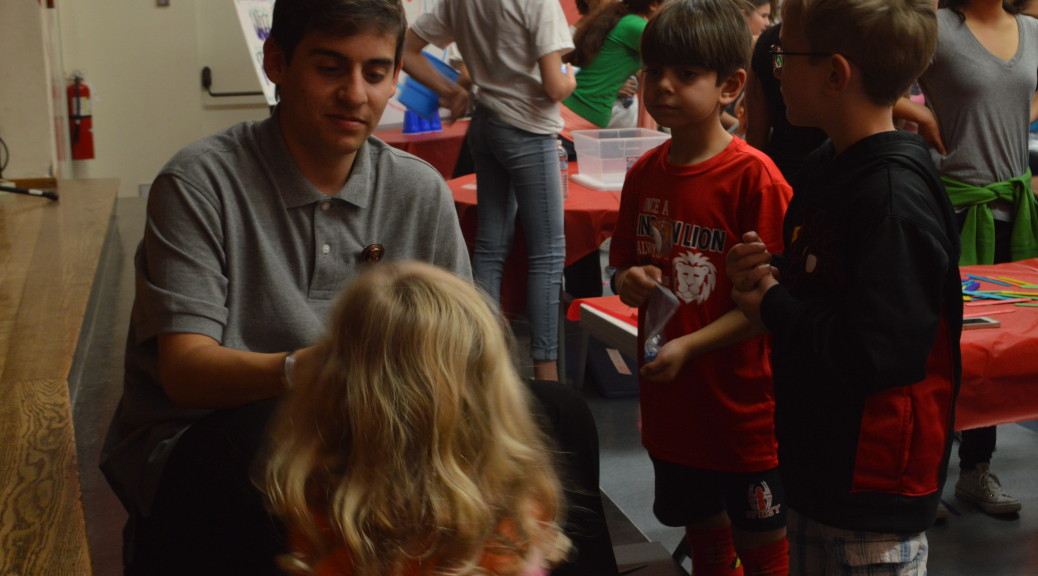 The Lincoln Science Fair, a time to celebrate the scientific discoveries of others and the very essence of science itself. There were many different types of exhibits set up, including ones detailing findings on potatoes growing, static electricity’s effect on liquids, and even one that used air to blow down stacks of cups. And on the stage there was Team 696 Robotics from Clark Magnet with their 2014 robot Snapdragon.

Children crowded the steps to the stage to get a look at Snapdragon and the team members controlling it. To maintain maximum safety, no kids were allowed on the stage apart from Team 696 members, but that didn’t stop 696 from interacting with the Lincoln students.

Snapdragon doesn’t only roll balls and pick them up, it can also launch them through the air. Due to safety reasons, 696 couldn’t launch it to the children, no matter how badly they wanted us to. But the Lincoln students were just as excited to witness the launching nonetheless.

The Lincoln students were entranced with how Snapdragon could not only roll the ball towards them, pick it back up, but also throw the ball across the stage. Over and over they asked to be able to drive it, but we just couldn’t let them. But this never stopped the smiles from appearing on their faces while watching the robot.

Another favorite activity of the children was to help Snapdragon in it’s operations. To do this, they followed a Team 696 member’s instructions. First, they had to all open their arms down on the count of three. This would let Snapdragon open up. They then would hold their arms like a catapult, and once again, on the count of three they would release. At the same time Snapdragon would throw the ball across the stage. This always brought laughter and joy to the onlookers.

All too soon did the Lincoln Science Fair end, making it time for Team 696 to pack up Snapdragon and head back to Clark Magnet. While leaving, parents and students came up to thank them for coming to the Lincoln Science Fair, explaining how their children had loved every second of it. They asked if we’d return the following year and were relieved to hear we certainly planned to. 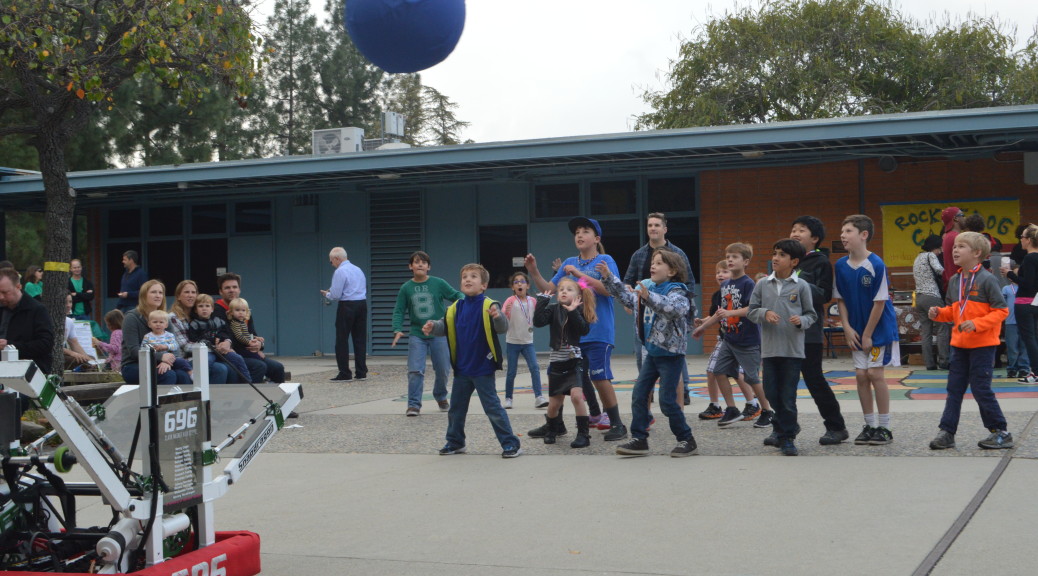 While Clark’s Expo Day didn’t start until 11:00, Team 696 members arrived at Clark in their team shirts and black slacks before 9:00 AM. Expo Day is very important for showing what type of high school Clark Magnet is to parents and prospective students. While there are many classes and courses that are open to visitors, Team 696’s lab is the main attraction to many. Clark’s Expo Day even made the news on LA Times!

Prior to 11:00, team members helped position multiple robots from past competitions throughout the school. Two members would stand with each robot to explain to guests what Team 696 was and to answer any questions. If prompted, which was often, one member would also lead intrigued guests to our Robotic’s lab where other members were waiting to give a tour of the lab.

The lab was filled with excited parents being pulled forth by their children. With so much going on, many 696 members were available to explain what transpires in the lab to anyone that wished to know.

Sipan explained the Swerve Drive, a type of wheel mechanism designed and created by a past Team 696 member.

Mikia was in charge of 3D printing 696 dog-tags for the guests, so he would explain the steps taken when 3D printing objects. He also elaborated on how a mechanism is created.

Mika walked around the lab with guests, showing them our many machines and explaining their functions. She also talked in-depth on how members were chosen to be part of the team.

A very popular attraction was the driving of Snapdragon. Taking place right outside of the lab, people gathered around to watch our 2014 robot Snapdragon throw a ball and chase it down. Some lucky spectators were even able to participate in this event!

After Clark’s Expo Day came to an end, and all parents and students long headed back home, Team 696 members remained behind to clean up their school and the lab. At around 4:00, Mr. Hoard and four members loaded Snapdragon into his truck and drove over to Mountain Ave.’s Science Fair.

Team 696’s appearance at the Science Fair has been a long-kept tradition of the team and a favorite event with the children. Their joyful screams filled the air as they waited for the ball to get launched their way. They’d scramble to get it, then race to replace it back into Snapdragon.

The only thing the children loved more than catching the ball flung from Snapdragon was being able to actually drive it themselves. Team 696 member Daniel and Driver of Snapdragon explained to each student how to control the robot. Their faces could hardly contain their wide smiles.

A collective sigh spread around when it was time for Snapdragon and Team 696 to pack up and return to Clark. Promising to return the next year, Team 696 members loaded Snapdragon back in the truck and drove back to their lab.