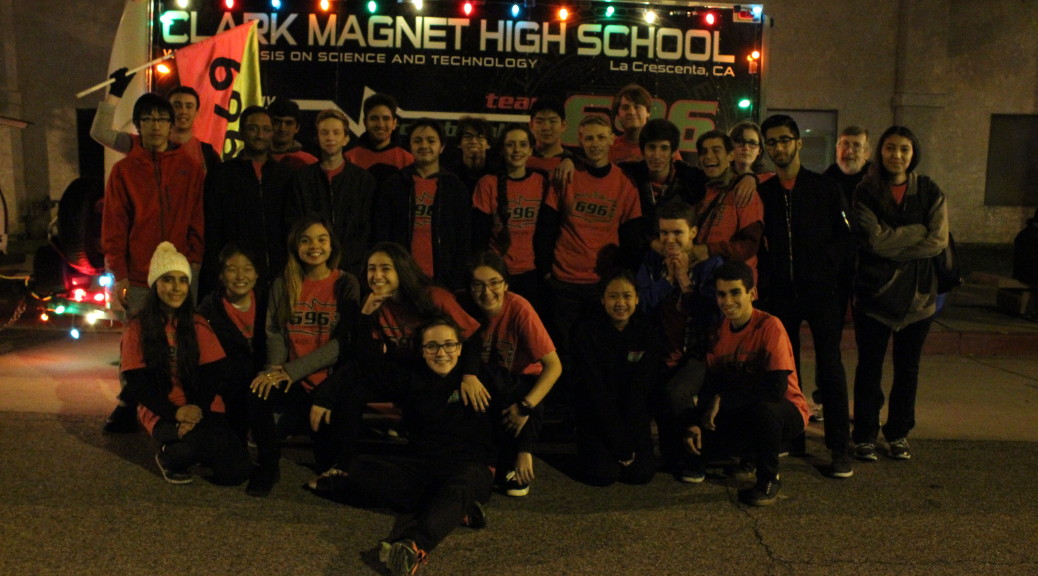 Prior to the actual parade, some members joined Mr. Black at the lab to finish loading the trailer. They also made the final adjustments to the robots and trailer’s lights. Everyone was adorned in the pink colored Team 696 shirts, working diligently with one-another so everything would be ready for the parade. As our school’s motto says: “Measure twice, cut once.”

Whilst some members double and triple checked that everything was ready and good to go, the rest made sure the lab machinery was in the proper state of off. This was to ensure nothing was accidentally on, for that would be mighty dangerous.

Once everything was taken down to where the Montrose Christmas Parade was to take place, the team took a moment to collect themselves. Gathering together, they talked amiably, waiting for the actual parade to begin. Soon, everyone had arrived, and so a group photo was taken. Afterwards the members huddled together for a pep-talk.

Mr. Black also pulled aside the “leaders” of the parade, making sure they knew what to do and that they felt ready.

Once the parade finally started moving, the column of pink quickly entered between two rows of cheering adults and children watching the parade’s procession. Anna proudly waved the Team 696 flag for all to see, inspiring both the other members and the onlooking crowds.

Members waved at the crowds, and even gave the young children high-fives when passing by. This made moods skyrocket, and it all felt like one big holiday celebration.

The air was filled with people giving holiday greetings and wishes to one another throughout the parade. People rejoiced at seeing our friendly team members in their bright pink shirts, feeling the warmth and joy radiating out from the team.

Not only did the team provide warm greetings to those around, they also passed giant light balls to one another. Sometimes they’d roll it to children to throw back, causing smiles to spring up everywhere.

Though the night itself was cold, all those involved or watching the parade were anything but. A gentle warmth could be felt within all present that Saturday, and spirits couldn’t be any higher.